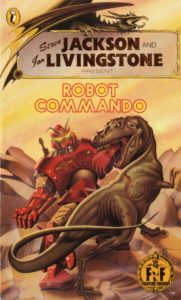 The Fighting Fantasy gamebooks by Steve Jackson and Ian Livingstone were blockbusters of the era. Let’s hop into our giant mechs and punch dinosaurs in Robot Commando! Wait is this a real book?…

In 1982, Steve Jackson and Ian Livingstone, founders of Games Workshop, released the book ‘The Warlock of Firetop Mountain’. Intended as an introduction to tabletop role-playing games of the era, the book’s choose-your-own-adventure format mixed with simple dice-based combat proved massively successful, giving rise to a full series of books – Fighting Fantasy. With over 65 books in the series by a legion of authors and illustrators, the series’ legacy continues to this day. Come along with us as Cybe and co play through each one – with no prior knowledge, no hints or walkthroughs and no cheating!

Before continuing, please be aware that all of this content is made possible by the goodwill and support of my backers on Patreon. If you enjoy the work on this site, please consider supporting the creation of more content like this by clicking the button.

As you can see from the cover, this book involves giant robots and dinosaurs. In fact, your character owns a dinosaur ranch, and uses the giant robots to herd dinosaurs. This was made about a decade before Jurassic Park reminded us all that trying to put a bunch of giant carnivorous reptiles behind some flimsy fences is not a great idea.

This book has been requested by readers several times, I assume purely because my readers know just how much I dislike the sci-fi Fighting Fantasy collection. No, really, for this blog I’ve already played through Starship Traveller, Rebel Planet, Freeway Fighter, Space Assassin, and they have all been unrelentingly painful.

I mean yeah, the fantasy ones can be very generic at times, but very few of them has ever left me wanting to peel out my own teeth and clean the inside of my skull out with them. Except perhaps Chasms of Malice. But still, people have requested that I play this one. I can think of only two possible reasons. The first is that this is a damn good book and will totally change my mind about sci-fi FF books. The second is that people like to torture me with unfathomable agonising pain.

I suspect that it’s the latter, to be totally honest with you. But enough rambling, let’s get on with the analysis. As you can see from the cover, this book involves giant robots and dinosaurs. In fact, your character owns a dinosaur ranch, and uses the giant robots to herd dinosaurs.

Nontheless, I get home one day from a long day of dinosaur herding to find that the entire country has been drugged with sleeping pills, so that an enemy nation of villainous bad guys can invade. I’ve honestly no idea how they could have drugged the food of every single person in the country, or why I’m not affected as well. Perhaps I had lasagna instead of chicken for dinner the night before. Anyway, despite this game being set in a world far off in the future in which giant robots are a thing and high-tech guns are easily obtainable, my character rushes to fetch his father’s sword from the attic. Ah, I see that we’re working on the Final Fantasy approach to gunfire and swords.

Heading out into the robot’s parking lot, I pick a robot to drive. Eventually settling on a cowboy robot (designed to herd dinosaurs, it is a biped robot which I imagine has a cowboy hat on top of its head), I’m asked to choose my destination. There are two cities I can go, which are named ‘The City of Knowledge’ or ‘The City of Industry’. Urrrgh. This book is going to hurt, isn’t it?

While travelling, I’m attacked by a random Pterandon, which is easily swatted by my robot. When I arrive in the City of Knowledge, I head straight to the medical college, where I start to research a cure for the sleeping sickness. Given that I’m a rancher of dinosaurs, it should come as no surprise that I am also a skilled chemist and am quickly able to find a cure. There’s enough items in the college for me to make a glass bottle of Blue Potion (yes, that’s what it’s actually called), but I have to be careful with it as it will evaporate on contact with the air. Also, I have to give it to the whole country all at once. Seems a bit contrived, don’t you think?

So with my Blue Potion safely tucked away, I decide to check out the military college before I leave town. Yes, there’s a military college. Maybe there’s some info I can use to gather the people together and give them a strategy to defeat the Evil McEviltons who are invading our little country. In fact, there’s a couple of them guarding the military college, apparently having realised that someone might do this very thing. But I’m able to walk right past them, because they assume I’m one of their friends due to the fact that I’m not asleep. Y’know, there’s lucky and there’s just stupid…

The military college is fairly useless for me, as the book I manage to grab and read (on Emergency Procedures, which sadly doesn’t contain any details on what to do in an emergency such as invasion from enemy stormtroopers) has no useful info, and I’m hurried out of the college. But as I leave, I opt to steal the enemy guard’s giant robot, which is a powerful machine that can transform into a fighter jet. Sadly I’ve no idea how to actually use the damn thing, so I’m actually weaker when using it.

Determined to waste yet more time, I go to check out the local museum before I leave town. Inside, I manage to find a Luck Amulet. One that has been scientifically proven to work, the book says. The very concept of this is so mind-boggling that I can’t even put it into words. A scientifically-proven luck amulet. How does that even work? Urgh. Anyway, as I leave the museum I catch sight of a giant robot Tyrannosaurus rampaging around the place. I kill it, pretty much wrecking the fighter jet robot that I’m piloting in the process.

By the time I get there, I realise that there isn’t a weather machine or anything similar to be found. I head immediately to the fuel-refinery, only to be attacked by two of the enemy’s giant tripod robots (who no doubt are chanting ‘Ulla’ all the meanwhile) and sneak into the refinery, only to be subjected to a hefty dose of radiation. The book then tells me to leave and not return to that area. Le sigh.

Instead, I head to the robot experimentation center, hoping that I’ll be able to find a new robot that I can actually pilot. I’m in luck, because I find a mechanical interface helmet that makes up for my lower skill in this transformer robot. I also manage to find a heat-seeking missile to give my robot, not that this helps much as by this point in the adventure it’s barely holding itself together any more. And I also manage to find a highly powerful ninja warfare suit, which damn near kills me when I put it on, sending me crashing into walls and such like.

I’ve only got two other options in the City of Industry – to check out the sewers, or to ‘just explore’. Gosh, as much fun as wading through toxic sewage sounds, I’ll opt to just wander the city cluelessly instead. Eventually I find myself in the city’s junkyard, where I encounter a gorilla. I spend a few minutes wondering why there’s a gorilla out here, and then choose the option to speak to it. The book then informs me that the gorilla is a pet, and that it will help me repair my robot. The logic in this is bewildering.

So now that my robot is in better shape, and probably full of bananas, I continue to explore until I’m given two choices – go into the sewer tunnels, or head back to the robot experimentation center. Without any real choice, I trudge into the sewers. I stumble through tunnels for literally ages, going around and around until I realize that this entire segment is just one massive maze. Like the maze of Zagor back in Warlock of Firetop Mountain, except significantly less entertaining. And I loathed the maze in Warlock of Firetop Mountain!

Eventually I find a small lift, which seems to offer me a way out of this hell. I click the button to make it go, and it won’t start. I blindly press the other buttons, until I find one of them that makes the lift go up. Then the lift stops going up and starts to go back down again. Very fast. With a loud crash. I die in the crash. Strangely, this segment of the book reminds me of a seafront amusement ride that I remember at Scarborough…

So that’s Robot Commando. I’m sure there’s a lot more to it, but I’ll leave that for people who like this sort of thing. The robots are implimented well enough though, so I can’t fault it on that regard. If you like giant robots and you want to grow up to be a Gundam pilot or something, this should be a good read for you. It should have had more dinosaurs, though. Actually, it should have had a whole lot more fun, but more dinosaurs would be a good start!

In other news, it seems that I won’t be being made redundant after all, as my company want to retain my skills and redeploy me to their new department office. Which is in Leeds, all the way across the country. For the next few weeks, my life is going to be very, very chaotic…

Cause of death: Elevator ride to oblivion.